Watch the closing ceremony of the 2020 Tokyo Paralympic Games

Watch the closing ceremony of the 2020 Tokyo Paralympic Games 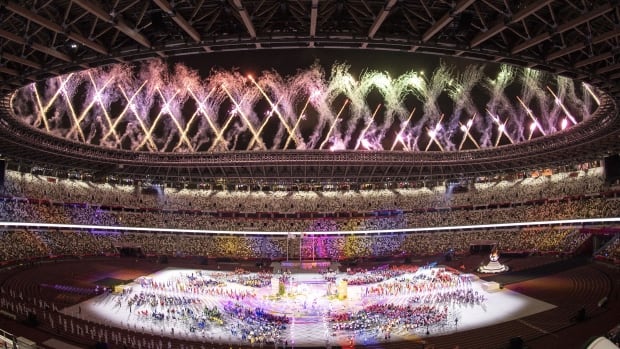 The closing ceremony for the 2020 Tokyo Paralympic Games got underway Sunday, with Canadian athlete Brent Lakatos leading Canada’s team as flag-bearer, ahead of the flame being extinguished.

Click on the video player above to watch live coverage of the closing ceremony of the Games. It’s also airing live on CBC TV network, CBC Gem, the CBC Sports app, and the CBC Sports website.

You can also watch the stream with described video and closed captions or American Sign Language interpretation in the links below.

An Encore Presentation will air on CBC TV beginning at 3 p.m. local time, with the ceremony posted online and on CBC Gem.

Andrew Parsons, president of the International Paralympic Committee, reflected briefly on the difficult road to Tokyo 2020.

The concepts underlying Sunday’s closing ceremony were “Harmonious Cacophony,” while the presentation was meant to convey the idea that Tokyo is a city where difference shines. Organizers referred to the theme as a “world inspired by the Paralympics, one where differences shine.”

Lakatos entered the stadium wearing a “Canadian Tuxedo,” with the country’s flag attached to his wheelchair.

Lakatos, the 41-year-old wheelchair racer from Dorval, Que., took on the honour of bearing the flag merely hours after competing in his last race in Tokyo.

The athlete was the final Canadian to compete and claimed a fourth-place finish in the men’s T54 marathon. He had captured four silvers at these Games, increasing his career Paralympic medal count to 11.

A contingent representing Afghanistan was among the first flags to enter the stadium as the ceremony got underway.

Following the entry of national flags, the event introduced I’mPOSSIBLE — an education program developed by the Agitos Foundation, the International Paralympic Committee’s (IPC) development arm. A brief presentation saw three schools (two from Japan, one from oversees) and two Paralympic athletes recognized for their contributions toward inclusion.

Before the harmonious cacophony commenced, the many volunteers who helped Tokyo 2020 materialize were acknowledged with a rousing round of applause.

The harmonious cacophony presentation included various performers helping to build the city where difference shines, before musical acts began while others mimicked dancing in the streets in celebration.

After the lowering of the Paralympic flag, it was time to complete the handover portion of the ceremony, setting the table for Paris 2024.

Eight of those were won in the pool at the Tokyo Aquatics Centre. Para swimmer Aurélie Rivard leaves Tokyo with five podium finishes, one of these being achieved alongside other Canadian women in the 4×100-metre freestyle relay.

Eight other medals fell in the realm of athletics: three track cycling, one judo, and one triathlon.

The medal in judo, a silver, was won by Canada’s opening ceremony flag-bearer Priscilla Gagné.

Canada finishes ranked 23rd in the standings and has the 19th-most medals at the Games.

China tops the standings with a massive haul of 207 medals, 96 of those being gold. Great Britain takes the second place spot with 124 medals (41 gold.)