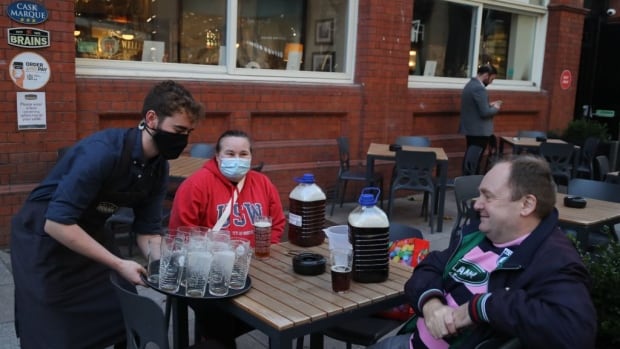 A police force in England says it will try to stop people from leaving Wales, which has started a 17-day lockdown to slow a surging rate of coronavirus infections.

The Gloucestershire Constabulary in southwest England will patrol routes from Wales and pull over drivers they believe are making long journeys.

Travellers without a good excuse will be asked to turn around. If they don’t comply, officers will inform their Welsh counterparts so they can take action because Gloucestershire police don’t have the authority to fine people travelling from Wales, the department said.

The situation illustrates the patchwork of coronavirus restrictions imposed by authorities throughout the U.K., which has Europe’s deadliest coronavirus numbers, with 44,661 confirmed virus deaths. Some 1,756 of those occurred in Wales, which has a population of about three million.

Under the U.K.’s system of devolved authority, Wales, Scotland and Northern Ireland have established their own public health rules. Meanwhile, the national government in Westminster has created a three-tiered virus alert system that applies to England alone.

South Yorkshire county, which includes the city of Sheffield, on Saturday became the latest region to enter Tier 3 — the tightest level of virus risk restrictions in England — following Liverpool, Greater Manchester and Lancashire.

But it is the Welsh government that has imposed one of the U.K.’s strictest lockdowns, including a ban on non-essential travel. Under rules that took effect Friday evening, Wales also closed most businesses and restricted high schools to online instruction.

Another English police force, West Mercia, also said it will be working with its Welsh counterparts to “enforce, where necessary, the relevant rules for the area we serve.”

New infections are continuing to rise across Britain. Prof. Neil Ferguson, whose modelling led to the U.K.’s original lockdown in March, told the BBC that the current situation was “worrying.”

“We are in a critical time right now,” he said. “The health system will not be able to cope with this rate of growth for much longer.”