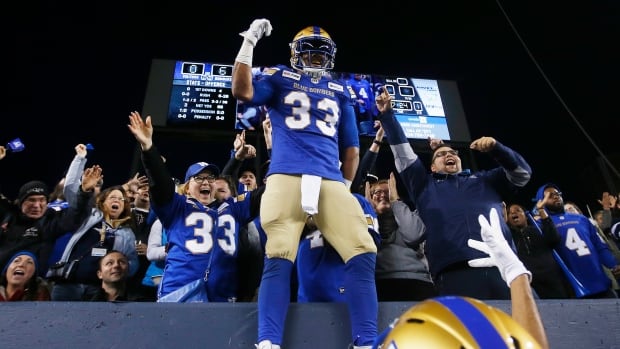 Winnipeg will be the hub city for the CFL’s shortened 2020 season if the league and its players can agree on a deal.

The CFL chose Winnipeg over bids from Calgary and Regina, pending approval from public health officials in Manitoba.

“All three proposals — from Saskatchewan, Winnipeg and Calgary — were excellent and all three would make superb hosts,” said CFL commissioner Randy Ambrosie.

“We look forward to returning to Saskatchewan for Grey Cup in 2022 and we remain immensely proud of the tremendous Grey Cup that Calgary hosted just a year ago.”

Following the postponement of the season due to COVID-19 in June, the CFL hopes to begin a shortened schedule in September with 60 games over 15 weeks. A cancelled campaign remains possible, should the league and union fail to come to an agreement on terms for a return to play.

The CFL says it needs a new collective bargaining agreement with the CFL Players’ Association, and significant federal government support to start a 2020 season during the COVID-19 pandemic.

The CFL has set a deadline of Thursday for a new CBA.

If the season goes ahead, players and coaches will be in a bubble consisting of hotels, practice fields and a stadium.

“The health and safety of our players, staff and the wider community are paramount and the CFL will only return to play with the approval of health officials and medical experts,” Blue Bombers president/CEO Wade Miller said in a statement.

“While today marks just one more step in our process, we’re grateful for the support of the Province of Manitoba and the City of Winnipeg, and the work all Manitobans have done together to fight this pandemic and make our province as safe as possible.”

Manitoba Premier Brian Pallister announced an offer of $2.5 million on Monday to help pay for accommodations, transportation, practice field rentals and more. Saskatchewan offered $3 million later in the day, but the league still settled on Winnipeg.

CFL players concerned about their safety in a shortened ’20 season will have the right to opt out without penalty.

The CFL and CFLPA continue to negotiate amendments to the current collective bargaining agreement to allow for a condensed season to be played.

Two sources said Tuesday even if the two sides successfully amend CBA by Thursday — the CFL-mandated deadline — players concerned about their safety will be allowed to opt out with impunity.

The sources were granted anonymity because the CFL and CFLPA haven’t formally announced details of their ongoing negotiations.

The sources said the two sides continue to discuss the logistics of American players coming to Canada being tested before their arrival here.

Miller is optimistic a deal can be reached.

“We’re working really positively with our players,” Miller said during a telephone interview. “Everyone is looking for a solution to get our players back on the field playing football. It’s very positive.”

Predictably, Miller wouldn’t comment about any specifics being discussed.

Manitoba’s plan calls for a 60-game schedule and Grey Cup to be played in Winnipeg.

Earlier this month, the league submitted a revised financial request to Ottawa for roughly $42.5 million in aid.

In April, the CFL asked the federal government for up to $150 million in assistance in the event of a cancelled 2020 season due to the pandemic. The new request covers operating costs and player salaries for a shortened campaign and includes a letter of support from the CFLPA.

But the CFL’s revised request will require co-operation from the six provinces its franchises operate within. That’s because Ottawa is dealing with the league’s offer via the Business Development Bank of Canada (BDC), which is a federal agency but also a crown corporation, meaning the federal government can’t mandate financial assistance for the CFL.

The BDC is essentially a bank with lending criteria and the CFL is unlikely to qualify given its financial state. To secure financial assistance, the league would likely require the Quebec, Ontario, Manitoba, Saskatchewan, Alberta and B.C. governments to serve as guarantors on any funding provided.

That could be an issue as Ontario sports minister Lisa MacLeod has stated there are many other sectors within the province that also require government help.

If there’s a shortened ’20 season, it would afford the CFL an opportunity to go with one division rather than its traditional East-West format.

A 60-game season would mean each team plays six regular-season contests. The top eight would make the playoffs, with the final two teams meeting in the Grey Cup game.

The Manitoba government’s bid calls for all players to be tested upon their arrival to Winnipeg. That could create a risk, given many players would be coming from the U.S., where COVID-19 has caused far bigger problems.

But the sources say talks continue about players being tested prior to boarding their flights to Manitoba. And once in Winning, the plan would be for all CFL team officials to be in a virus-free bubble.

Recently, the Canadian government determined the Toronto Blue Jays couldn’t play at Rogers Centre because the pandemic had made it unsafe for players to travel between Canada and the U.S. regularly. But Miller doesn’t feel that situation applies to Americans coming to Canada to play football.

“I think that was a different scenario,” he said. “You’ve seen it with the NHL having players here so I think the NHL is a better example of what the CFL would be doing.”

If an abbreviated season is deemed a go, the expectation is the players could report to the hub by mid-August. After a one-week quarantine, training camps would then be open, paving the way for regular-season games to begin in September.