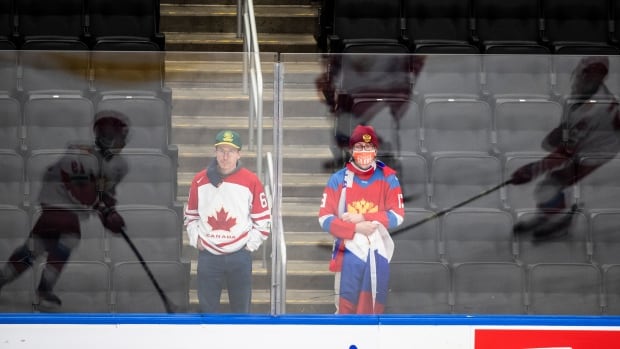 The women’s under-18 world hockey championship was among a number of tournaments cancelled by the International Ice Hockey Federation (IIHF) on Friday.

The IIHF said all events scheduled to begin in January were called off on advice of medical experts due to the rapid spread of the COVID-19 Omicron variant.

“These are hard facts to have to face, and as with last year we must take the difficult decision to cancel men’s and women’s IIHF events, including the women’s U18 top division now for the second year in a row,” said IIHF president Luc Tardif.

The men’s world juniors, a U20 tournament, began with exhibition games on Thursday but officially gets underway on Sunday in Alberta. A pre-tournament game between Sweden and the Czech Republic was already nixed due to COVID-19 protocol.

IIHF communications manager Adam Steiss said the men’s world juniors are going ahead while the January tournaments have been cancelled because “the epidemiological situation changed drastically only after the [men’s] U20 players entered quarantine.”

“The medical committee’s recommendation took into account the travel risks that the teams playing in the January tournaments would have faced, and the belief that the tournament organizers would not have been able to safely manage an outbreak,” Steiss said in an email to The Canadian Press.

The IIHF said it could not postpone the women’s U18 tournament, pegged to begin Jan. 8 in Linköping and Mjölby, Sweden, “due to league commitments” in the host country.

It marks the second straight year the tournament has been cancelled due to the pandemic. The U.S. beat Canada for gold the last time the tournament was contested in January 2020 in Slovakia.

Hockey Canada said in a statement it was “extremely disappointed” by the cancellation.

“Our entire team has worked hard both on and off the ice to be ready to compete next month in Linköping and Mjölby, Sweden, even going so far as to cancel our selection camp out of an abundance of caution and to ensure our players and staff would be able to represent Canada on the world stage.”

“We understand the changing landscape and uncertainty of the COVID-19 pandemic and we know cancelling events is never a decision that is made lightly.”

Some players have spoken out on social media on the growing gender imbalance in the IIHF.

Hockey Hall of Famer Hayley Wickenheiser said on Twitter that she question’s the IIHF’s stated reason for cancelling the women’s U18 tournament.

“Nothing to do with safety, if they can pull off the [men’s tournament],” she wrote, noting that event is a much bigger source of revenue for the IIHF. “Where there is a will, there is always a way. I question the ‘will’ part.”

“It’s super insulting and degrading to announce the cancellation (not even postponement or relocation) of the Women’s U18 while a men’s tournament is being carried on not once but two years in a row,” Szabados tweeted. “Do better.”

“The IIHF has prioritized & held top division men’s events during the pandemic but the top division women’s events – cancelled – again. UNACCEPTABLE. Figure out how to safely play the U18 Worlds this season, just like the U18 men & #WorldJuniors. These players DESERVE to play too,” Coyne Schofield wrote on Twitter.

The IIHF has prioritized &amp; held top division men’s events during the pandemic but the top division women’s events – cancelled – again. UNACCEPTABLE. Figure out how to safely play the U18 Worlds this season, just like the U18 men &amp; <a href=”https://twitter.com/hashtag/WorldJuniors?src=hash&amp;ref_src=twsrc%5Etfw”>#WorldJuniors</a>. These players DESERVE to play too. <a href=”https://t.co/QhDwaPdM4r”>https://t.co/QhDwaPdM4r</a>

“Why is it automatically a cancellation? We understand the concerns regarding health and safety but why is a postponement not considered for these women as the men’s tournaments continue without hesitation? #equalityinsport @IIHFHockey,” Ambrose wrote.

Other tournament cancellations include lower-tier men’s and women’s competitions.