Written off after Olympic disappointment, Paula Findlay re-emerges as a force

Written off after Olympic disappointment, Paula Findlay re-emerges as a force

In the life of a high-performance Canadian athlete there is a small window, usually once every four years at the Olympics, when the spotlight shines down and the eyes of a nation are squarely fixed on you.

For Edmonton’s Paula Findlay, a medal contender at the 2012 London Games in the triathlon event, her moment had arrived.

Findlay, after all, had taken the triathlon world by storm early in her career, seeing her catapult to the top of the rankings for much of 2010 and 2011.

But Aug. 4, 2012 in London turned out to be somewhat of a nightmare for Findlay.

Those gut-wrenching images — Findlay in tears, making her way to the finish line. With the crowd roaring Findlay ran towards the end, collapsing over and sobbing after completing the event.

She was in line for a medal but finished last, plagued by injury leading up to the event.

“I’m sorry. I really feel like I need to apologize to everybody,” she said, fighting back tears moments after finishing the race.

“I feel terrible. I had nothing. It’s the Olympics Games and it’s my first time here and it’s overwhelming. I finished. I really wanted to stop. It was a huge mental struggle just to get to the finish line.”

And then, like most athletes who compete in those less high-profile sports, Findlay somewhat disappeared from the limelight. 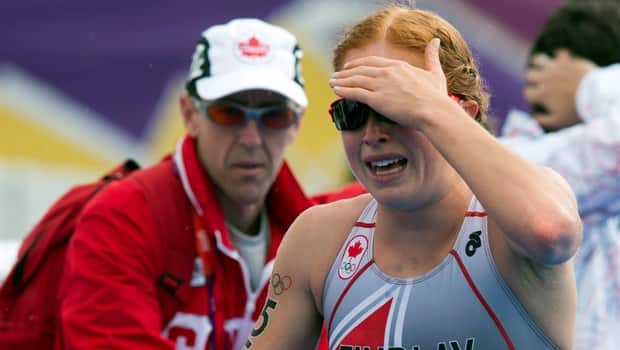 Paula Findlay’s post-race interview after the triathlon at the 2012 London Olympics was heartbreaking, as she apologized for her finish. 2:19

But on a brilliantly sunny Sunday at Florida’s Daytona International Speedway in early December some eight years after that catastrophic Olympic finish, Findlay emerged a champion yet again.

The redemptive power of sport.

Compare the agony of finishing last at the Olympics to the joy she exuded as she soared towards the finish line to capture the Professional Triathletes Organisation (PTO) 2020 Championship in Daytona Beach, Fla. — also winning a cool $100,000 US.

A beaming smile with Findlay back on top.

“It hasn’t quite sunk in. It’s been a whirlwind. I wasn’t expecting to race that well. It’s kind of reminiscent of 2010 when I had all these great race results and was flooded with messages,” she told CBC Sports.

The messages haven’t stopped pouring in, including from Olympic triathlon champion Simon Whitfield.

“It’s been a while since this has happened for me and I don’t take it for granted.”

The thing is, while the bright lights of the media went away and many Canadians really didn’t hear about Findlay after 2012, she has been competing — she didn’t let the disappointment of that Olympic experience define the rest of her career.

“I guess I’ve been written off a little bit over the years but showed I still have a little bit in me,” she said.

“I’m pretty good at forging ahead and that’s why I’m still racing. Even right after the Olympics in London I was ready to keep racing. I hadn’t quit the sport. I’ve been racing. Never big enough to get attention from the media. It appears I’ve been gone but I’ve been racing.”

At 31, Findlay is running faster, swimming stronger and biking the best she ever has. Obviously the pandemic threw a wrench into her training over the past year, including not getting into a pool for six months. But the time away allowed Findlay to refocus and recharge.

It paid off and she cashed in.

“To have a top result now, I appreciate it so much more,” Findlay said. “I’m obviously a lot older now and I’m a better place in my life.”

The natural question then after a performance like this is what it means for the Tokyo Olympics.

That’s where things get a tad complicated for Findlay.

“It’s interesting now, everyone is asking me if I’m going to Tokyo. It’s out of my hands. I would love to go,” she said.

“I think I could qualify if it was just based on who the fastest person was right now but there’s a lot more to it than that.”

Findlay has cut ties with Triathlon Canada. She doesn’t really want to get into the finer details of it but the tone in her voice suggests a heavy amount of politics are involved with making the team and being able to represent Canada at the Olympics.

“I don’t want to get much into this but I don’t have a relationship with Triathlon Canada right now. It’s probably not going to happen because of the way it is,” she said.

“If Triathlon Canada called me tomorrow and told me I could be on the start line in Tokyo without jumping through a million hoops, I would love to.”

Findlay had wanted to compete for Canada at the Rio Games and was seemingly in line to do so. However, Triathlon Canada did not select her to compete.

“I tried to go to the Rio Olympics in 2016 and trained with that in mind and that was my goal. I didn’t make the Olympics team that year,” she said.

“It just made me realize how challenging it is to have your fate in someone else’s hands. The selection was out of my control.”

For its part, Triathlon Canada High Performance Director, Eugene Liang, says Findlay is in good standing with the national sport body and is “eligible for her International Competition Card for pro events.”

Liang says that to be eligible to compete at the Olympic Games, all athletes from all countries have to meet eligibility and qualification as defined by World Triathlon (formerly International Triathlon Union) and the IOC.

“From there, athletes must meet their published nomination policies [which comply with all legal requirements set forth by World Triathlon and IOC]. The nomination policy for the Olympics has been public for two years.  Within that timeframe all athletes are provided equal opportunity to meet nomination,” he said.

Liang says the systems in play are designed to ensure unbiased and transparent nomination criteria for all athletes, in Canada and around the world, so they can pursue qualifying for the Olympics should they choose to go that path.

“The last time Paula raced a World Triathlon event that counted towards ranking and eligibility was 2017 as she decided to pursue her pro career and long-distance racing at that time,” Liang added.

“Of course we were happy for her to see her on top of the podium at Challenge Daytona,” he said.

“But it is important to note that she has been provided the same opportunity within the published criterias as every other athlete in the Canadian system to qualify for the Tokyo Olympic Games.”

As for why Findlay was left off the 2016 team, Liang says while this was before Triathlon Canada’s current leadership, it is his understanding she did not meet the selection criteria.

Findlay says she’s now taken her career into her own hands and is performing better than ever because of it — she also gets to compete and train alongside her boyfriend, fellow triathlete Eric Lagerstrom.

This most recent win has buoyed Findlay’s belief in herself, saying she feels like she can compete for another decade if her body allows.

It’s a remarkable turnaround years after many had written her off.

“I want to be a role model for kids and for people who are going through tough times,” she said. “I don’t take it for granted. Your body can only do this for so long. And then when I have a day like I did the other day I want to do this forever.”